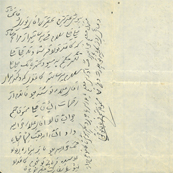 Correspondence between Surur al-Saltanah (daughter of Zarrin Kulah Khanum and Khazin al-Mulk and wife of ‘Abd al-Husayn Taymurtash) and her son, Amir Hushang Taymurtash: 1- Surur al-Saltanah writes to Hushang in London from Berlin, and, among other things, discusses the problems with finding a place for Hushang to stay during the break. She mentions how busy Papa (Taymurtash) is with the negotiations about the oil treaty (December 17, 1932); 2- Surur al-Saltanah’s letter to Hushang, sending greetings to Mr. Nuri and Dr. Young, and thanking her son for his Sunday prayer for his parents. Surur al-Saltanah tells Hushang that she does not have a new photograph to send him, also tells him about selling their houses to pay their debts; 3- a short letter by Surur al-Saltanah to Hushang regarding a date for meeting; 4- Surur al-Saltanah writes to Hushang about selling their household furnishings and how she has kept some of Hushang’s and her other children’s furniture and personal items; 5- Hushang writes to his mother (accompanied by an envelope), telling her about his exams and asks her for the reasons she is going to Khurasan. He sends greetings to Manuchihr, Iran, and Mihrpur [his brothers and sister] (March 4, 1934).