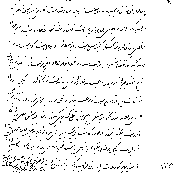 Correspondence regarding the salary of Zinat al-Muluk, the grandchild of Muhammad Mahdi Khan Qajar. She wrote that a third of her grandfather’s salary was allocated for her during Muzaffar al-Din Shah’s reign, but was signed during that of Muhammad ʻAli Shah, and Salman Khan cut it, assuming that it dated to Muhammad ʻAli Shah’s reign. She asked for her salary to be paid to her so that she could support herself and her two children.